In 2009 Unilever, the world’s third biggest consumer goods manufacturer launched “The Compass” – their business strategy for sustainable growth. It sets out a vision of the company’s future, in which “our brands and services reach and inspire people across the world, helping us double the size of our business while reducing our environmental footprint and increasing our positive social impact”. The outcomes of Unilever’s business model are sustained growth; lower environmental impact; and positive social impact.

In 2012 Unilever adopted a new purpose – “To make sustainable living commonplace”. The new purpose builds on the original purpose of the company’s 19th century founder, William Lever, “to make cleanliness commonplace”. They have a Sustainable Living Plan, first launched in 2010, which sets out a range of ambitious sustainability targets to achieve by 2020. In April 2013 they published their year two progress report against the targets in the Plan. Unilever’s Sustainable Living Plan (USLP) is the company’s competitive differentiator.

Unilever has remained the top-scoring company in the Food Producers sector of the 2012 Dow Jones Sustainability Indexes (DJSI) for the 14th consecutive year and was named the Food and Beverage super-sector leader.

The diagram below represents the company’s idea of its virtuous circle of growth. It summarises how they derive profit from the application of their business model. 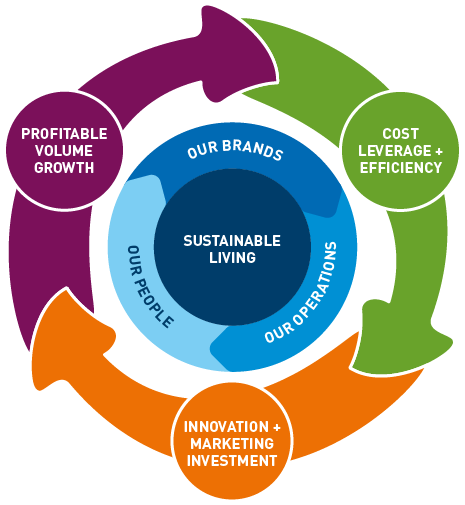 Aim to align overall corporate purpose with sustainability principles where sustainability drives value, where what the company does is a benefit to society, and where profits enable fair and equitable compensation for natural and societal resources.

BACK TO CASE STUDIES

CBSR thanks the following for their contribution to the Transformational Company Qualities.